RWA'S RTN aka Romancing The Novel aka Rockin' The Noggin.

I might officially be a real writer.
"Cods!" you might say. "You've been writing seriously and submitting (and being rejected - sorry about that bit) for over a year now!"
True. But last Saturday I felt like a real writer.
On May 15th in Adelaide, our fair and only slightly grimy city, Romance Writers of Australia held one of their Australian Roadshows, called 'Romancing the Novel'. SARA (South Australian Romance Authors) hosted it at the SA Writer's Centre. 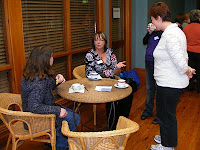 Yvonne Lindsay and rapt attendees. How pretty is the Writer's Centre?
I've met a few of the SARA people before, and thought I should like to go along (aka I was DYING to go). 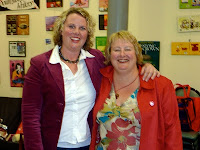 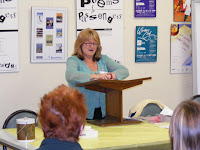 Trish Morey
So, I duly downloaded a few eBooks from these authors (I had previously only read Anne Oliver). I got stuck on Elizabeth Rolls' LORD BRAYBROOK'S PENNILESS BRIDE (I didn't want to rush it - very good), and was only a few pages into Yvonne's DEFIANT MISTRESS, RUTHLESS MILLIONAIRE when the highly-awaited day arrived. 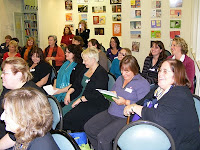 The aforementioned 'rapt audience'. That's me in my most romantic pink jacket, far right. :)
Eleni had hooked me up with another local writer who was also new to SARA, the very lovely Carol, and we drove in together. That is to say, Carol drove and I talked. This required a 6:50am house departure. Something I wasn't entirely certain I could do, what with kids and stuff. But, I was actually early! How about that? :)
We found our doorway when we met Amy T Matthews & Maggie Mundy: 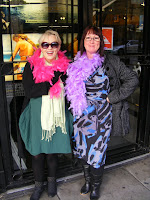 The day started with a cracker-bang and just got better and better.
Anna and Yvonne started us off with a 'Secrets of a Best-Selling Romance' session. I have been reading Deb Dixon's GMC (Goal, Motivation, Conflict), and they spoke about just that, and had us looking at those elements in our own works in progress, which actually made me question the GMC in my current wip more than reading Dixon's book did.
Yvonne and Anna spoke about Flimmers (Flying into the mist, Pantsers) or the opposite, Plotters. Funnily, Yvonne is a master plotter and Anna at the other end of the spectrum. These two spoke together really beautifully and it was interesting to see their differing working/speaking styles. They both had us giggling all day long!
Without going into fan-girl detail, there were sessions on characters, and and excellent one on Emotional Punch (incorporating Deep Point of View) with Anna that was excellent. I have always tried to keep right inside my characters' heads, running the risk of bogging the story down. I'm now going to be more mindful of where I am doing what kind of writing - keeping the Deep POV for more emotive scenes, not just delving into it whenever I fancy. 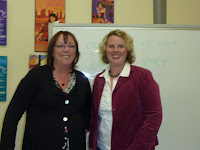 Yvonne & myself...
Anna also had a great section where she talked about writers' tendencies to concentrate on those senses that were most prevalent in their psyche (eg sight, touch) in their writing. We talked about a major scene in out wips and made lists of the things the character felt, heard, saw, tasted, and smelled. My biggest list was definitely sight, the others were dead even. So, I know now to use the other senses in my writing as much as I talk about what the character's SEE. Wow. Great stuff.
In fact, there was so much superb stuff to take away, that my head was spinning, but it was all GREAT information. Luckily, I took copious notes on loglines, high concept, great authors, writing styles, resources, filter words, voice, genres and publishers.
Told ya - was lots. :)
Christina Carlisle held a quick but meaty session on ePubs - I really wanted to meet her, as I'm friends with her nephew. She was delightful, and a fountain of knowledge.
I met some lovely people, aside from the authors, including Bronwyn Stuart who lives close by, and is responsible for some of the fab pics on this post. Thanks, Bronwyn. (My pics are the fuzzy ones, let's just get that straight. :) You can see more on her blog at her webbie. 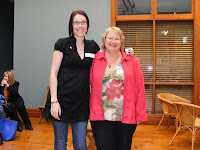 This is Bronwyn with Anna Campbell, who affectionately calls the former "Stalkey"
SO - the intention is - get my tush to SARA meetings and join RWA (GASP! I know! But, if I'm a member, they won't let me judge for R*BY, which might make me cry - I will join soon ((see above re 'real writer')).
Sadly, I could not join the crew at Eros restaurant for dinner, but I was home on Twitter when news of Anna Campbell's massive ARRA gong came through, so that was cool...
Fortunately, lunch was very tasty, as were the morning and afternoon teas. Donuts? No argument. :)
Speaking of tasty, there was also the goody bags and the novel stash. Ten books, nearly half of them author-signed. With MY NAME in it. SQUEEE!
Congrats to SARA and RWA for holding such a fabulicious seminar. See you next time.
Posted by Emmeline Lock 19 comments:

Romancing the Novel - SA Roadshow is nigh!

Yeeek! It's on tomorrow. I'm very excited, this will be my first ever seminar with like-minded writery people.
I leave the house at 6:50am, drop the kids to my mum's and GO!
More soon...
Posted by Emmeline Lock No comments:

Email ThisBlogThis!Share to TwitterShare to FacebookShare to Pinterest
Labels: SARA

and it woke me up! 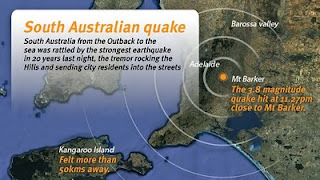 Whilst being cranky-pants at myself for being an indifferent blogger (this, despite having the app for that...), I knew I wanted to blog about the earth moving at my place recently.
No - nothing to do with the love of my life. He was asleep, and indeed, had to be woken to be informed the earth had trembled.
Yep, I'm talking earthquake.
On April 16th, at not quite 11:30, the we experienced tremors. In our little 'ol burg! We were quite famous there for a day or two.
So I was reading (Let's see, I think it was Gena Showalter's THE VAMPIRE'S BRIDE - excellent, excellent, FYI) on the iPhone (also known as the second love of my life), when I was jolted out of a particularly gripping passage by a truck driving through our bathroom.
That was what it was like - a big truck, or a four-million people strong pipes and drums band.
It lasted for about ten seconds. The WINDOWS rattled.
I gripped hubby, slightly disoriented form leaving Showalter's sexy vampire in a hurry, and I said, "What the f*&k was that?"
He said, "Earthquake." And went back to sleep. Good guy to have around in an emergency, my boy.
As I'm laying there, stunned (by the quake, not by hubby, he's always like that), a friend texts me, "What the f&%k was that?"
"Earthquake" I texted back. I had it on good authority.
So then, I get online (in bed, have I mentioned how much I love my phone?) and yes, there had been a quake. By 111:50, there was a 2000 strong group on Facebook called "I survived the Adelaide Earthquake 16/04/10". Amazing.
Of course, I immediately joined the group called, "I said, 'What the f%&k was that?' when the earthquake hit."
I had mostly forgotten about it the next day, until a man with a camera was roaming our paddocks. I was inclined to let the dog eat him, but the kids were watching out the window, so I went to see him and his female sidekick.
Apparently, the quake epicentre was in our paddock, and had I had a near-death experience last night when the terrible, terrible quake occurred?
I didn't think so, but I had been VERY sleepy...
I realised then that I was wearing tracksuit pants that were two inches too short in the leg, and a puce polo with chocolate stains on the front. In front of a man with a very large, shoulder holstered camera. My hair? Think uncooked rice noodles.
So, of course, I said, "What quake? I dinnent hear nuffink (honest, guv)." And I ran away, leaving them filming our paddocks and our monochromatic cows like they were on the red carpet at the Logies.
I proceeded to tell all my friends about how the quake started at OUR HOUSE! Do you think hubby didn't love that?!
Anyhoo, turns out, the 3.8 magnitude quake was actually three kilometres out of town, not two, and was actually under the Strawberry Farm up the road. Boohoo. Silly ABC News.
Anyway, here's a lovely link to a dramatic, "That might not be the end of it - aaargh!" article (also the source of the image above). Look out for the very excellent quote from a Mr Buckley. :)
Ta-ta. And remember to strap yourself in your bed tonight. You never know what will happen...
Em x
Posted by Emmeline Lock 2 comments: