Invasion of the Time-Suckers...

"So, did you tell him what I write? You're not embarassed by it?"

Yes, he had (Good. I didn't remember doing it). No, Hubby said. He thought it was good that I was doing something that makes me feel happy and productive. [NOTE: Hubby is one of those people with a will of iron. If his pants get tight, he will run up and down the driveway for days after the kids are in bed, until the weight is gone, or he breaks a hamstring. Whichever comes first. He still has clothes from his teens that he still wears. Ewww. Actually, that's foul.]

No, he liked that I how my reading and writing went together, and all in all, he thought I was kinda cool. I should make more time for writing. You know, work hard towards publication.

Oh. Well. That's nice. Sorry about the smack in the head, sweetie.

Hang on, what do you mean, make more time? I'm on the computer, like seven hours a day!

Yes, he said. You are. But are you writing?

Ah, he said. That's different. He then went on to dangle a sodding big carrot, telling me that if I spent more time on the actual writing, and less on facebook, twitter, blogs and communities, he might agree about that new laptop I've been on about (it's red, dudes. I know! Red!). This current one has a dicey screen...

Man, he fights dirrrrty. Isn't it sweet, though, that he knows me well enough to realise that I'm open to bribery? That's where 14.5 years gets you. [Less for murder, he says. Ha ha. Shut up, dear...]


My writing buddy, Anna Hackett is a writing machine. Our situations are different, I know. But it is discipline that gets her there, which I am slowly accumulating, but doesn't come to me naturally. But I also know she is very aware of the soul-sucking nature of some of these web things. It's not that she doesn't have a presence, it's just that she's off writing. Which is what we want to do. There is also not much point in building a profile - this wonderful platform - if you have nothing to say from it. I need to remember this.

See, now. There. That was cathartic. I will show this to the boy. This, the underside of my new leaf. You never know...

In other news, Rach (the other one of my writing buddies - she's working on Bites, but has had numerous articles published) and I are having a writeathon. We are to report to each other that we are doing the aforementioned amount (In my case, 1k on the new wip and finish the oldy this week), and report to each other Monday am. Starts today, ends October. Cool eh? I'm starting tonight!

Also, also. I am starting to walk again - five nights a week. The count is above - keep me honest, dudes! I am doing the lifestyle change again with the intention of losing weight and getting fitter. I'm not sure if I'm ready to share the details with the whole world just yet, though...

Right, gonna go chase up that errant sub that has been in NY for nearly four and a half months. Wish me luck!
Posted by Em ~ elove 12 comments:

PRK Eye Surgery - if you are a bit squeamish, or are just in it for the reviews, now would be be a good time to discover your toothbrush needs polish.

I had a MASSIVE post here - and the boy hit the delete key, when I had all selected. Then it autosaved a blank page. Crap. Now I'm too shitty to repost that which took me 90 minutes for me and my fuzzy eyes to write. Errrgh.

I've thought about it all day, and I've decided to give you the highlights in key words and phrases. Really, this could be an improvement. PRK Eye surgery has the capacity to be fairly revolting. So here goes:

- E forgot the drop-in-eye-for-the-week-beforehand eyedrops. Oopsie.
- Nice leather recliners in recovery room. Put these on personal shopping list. But not in white. What were they thinking? Don't they have children??
- More drugs in small bag. Five sleeping tablets. How much pain would I srsly need to endure?
- Everyone smiles in the surgery. Not much use, because they took glasses away and I haven't seen anything clearly since.
- Numbing eyedrops. Feels weird.
- Drugs, eyedrop form.
- Large machine I can't see because of lack of glasses. Could have been a wizard with a wand for all I knew.
- Doc says look at green light. I panic because green light has disappeared. I CAN'T SEE THE GREEN LIGHT!
- Eye speculum. Ewww. But comforting, because it makes blinking about as possible as walking on ceiling.
- Laser. Smells less like burning hair than I anticipated. More like burning human eyeball, I'd say.
- Green light has reappeared. Doc had his hand in front of it. Tool.
- Red laser light, green light, white light, repeated noise. Like a disco for your captive, immobile eyeball. Complete with drugs.
- Scraping off front of eyeball. Nicer than it sounds, due to drugs.
- Healing disc on eyeball. Repeat left eye.
- Back in gorgeous leather chairs. Will they notice if I pop one in my handbag?
- Ask where hubby is. Taking advantage of free biscuits, apparently. Will be in later.
- You paid how much? Biscuits looking less like freebie at this point...
- Take hubby to see doc post-op, in order to get drug regime into more heads. I just know I'll stuff it up.
- Blur.
- Fuzz.
- Weeping.
- Drugs.
- Hamilton's CERULEAN SINS on iPhone. Excellent. Will have to review when I can see keys better.
- Someone is pouring 98% salt saline into my eyes. No? Well, it feels like it.
- Can't keep eyes open, even though I want to.
- Sleep more than body likes.
- General discomfort.
- See doc next morning, all in order. Eyeball has not expoded or fallen out overnight. Cool.
- Hubby: He DID say it would get worse before it got better.
- Smack hubby.
- Hubby goes back to day job.
- Day 6 - still fuzzy, but healing lenses out now, so less prickly.
- Notice with improving vision that shower needs cleaning. Darn. Why'd I have to notice that first?
- Sleeping tablets still safe in little package. Yay, me!

I was hoping to go to SARA (South Australian Romance Authors) meeting tonight, but the double vision would make my driving even more suspect. And really, I just don't have the points to spare.

Hope everyone in DC is having a hoot!
Posted by Em ~ elove No comments:

The wait is over.

I think I was the second person, like, IN THE WORLD to buy this eBook presale. *Famous*

I read it and I loved it. And not just because Anna is my writing friend. The idea of a critique partner/group is to let you know if your work is sucky. It's our job. We will also tell you which parts of your work, well...work.

This latter part applies to all of SAVAGE DRAGON. I didn't read it before buying it - I have read Anna's work since. She submitted this one before we 'met'.

Description
They call him the Savage Dragon: Rordan Sarkany, knight of the Order of the Dragon, charged with tracking and destroying those who let their dragon blood turn them into beasts. In the wilds of Hungary, Rordan hunts one such creature—along with fellow warrior Kira Bethlen.
Both Rordan and his inner dragon desire Kira...and she can't resist Rordan's dangerous allure. But even if she succumbs to their attraction, can she ever forgive him for slaying her beloved brother?

They say this at eHQN:

If you like this book, then you'll love...
The Vision by Heather Graham
Raintree by Linda Howard
Enchantment & Bridge of Dreams by Christina Skye

Not a bad list, eh? I know that Howard is one of Anna's faves. Must be a great feeling to be compared to one of your must-reads.

Rordan and Kira are tracking the same wild - a person with dragon blood who has turned, and lost most of their humanity. They are both Knights of the Order of the Dragon , and have a history, but ever since Rordan killed Kira's wild brother, she won't forgive him. So - the fight's on. And not only the fight to take down this new wild - but they're both fighting their rekindled attraction...

She'd thought her brother could be saved - Rordan knows he was too far gone. They agree to find the wild together - so long as they stay out of each other's way.

When they are trapped by the rogue dragon inside it's rockface lair, they both come to realise that they might have been wrong. Rordan starts to wonder if perhaps wilds can be saved, and Kira, hurt in the fight, realises that the wilds are not going to return to their original form.

Rordan is crushed under a rockfall, and... I'm stopping there!

Suffice it to say, there is some VHS (Very Hot Sex), while they are trapped alone in a cave.

Anna has a beautifully consistent writing style and voice - the temperate, even flow of her stories makes for strong, kick-ass heroines and equally appealing, self-aware men. There are no low-points, she carries the movement of the piece right through to the end.
Her world building is complex and well-researched, and she thinks of everything. Conflict, background, emotion - it's all there. Not once are we left wondering about character motivation.
So. You need to go out and get yourself this book.

Start a collection, because there WILL be more Hackett to come...

The first novella (one I have read... yay, me! I loved her hero in it) of her WindKeepers Series - WIND KISSED, FIRE BOUND, comes out in September for Nocturne Bites. The second WindKeeper story will be released in October and is called TAKEN BY THE SOUTH WIND, (Again, great hero, and excellent story) has recently been given the go-ahead. And the winds come from the four corners of the earth, so you'd imagine there's windy weather ahead.... :)

Here are the links you'll need to start your Hackett online shrine (like mine - hee):

Anna's website
Anna's Blog, Midnight Confessions
The link to eHarlequin, where you can buy SAVAGE DRAGON

Go on, get at the forefront of the wave for this exciting new paranormal romance author. If I run my hands over my crystal ball - I can see great things in the future of Anna Hackett... 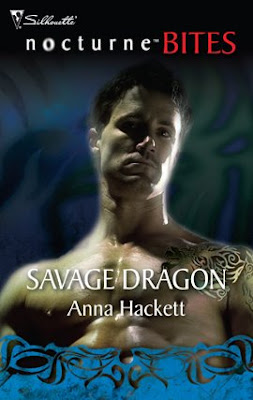 Or you can go here (Amazon 4 ya Kindle) and get it too.
Can't stay. I've got mine and I'm gonna go read it. Come and tell me what you think...
Better still, go tell Anna...
Thanks, peeps! x
Posted by Em ~ elove 2 comments: