REVIEW: "Aequitas I: Betrayal" by acMason, Lyrical Press 2009 and where the hell have I been?

You might ask of me. I've been limiting my computer time, or spending it more wisely (or not).
It's going oookay...

WORKING ON: Desire Deep Blue, paranormal short.
READING: The Devil Wears Prada, on audio, ever. so. slowly. Just finished AEQUITAS I: Betrayal, by ac Mason. See below for the REVIEW.
FEELING: Torched, man. I worked yesterday (I know, most of you work EVERY day! Well, I'm crap at that...)
LAST SONG: Don't know what it's called - The Letter, mebbe? Hoobastank and Amorosi.
WALK COUNT: Last week was great, this week is um..., 1 of 4. Um. EDIT: Caught up quick, now 4/4. Yay me... 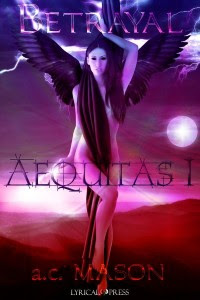 I read ac Mason's, AEQUITAS I: Betrayal. I won this, and promised I'd review it. It is planned as part of a trilogy, and currently Mason is working on part 2 - Punishment.

Here's Mason on Mason:
Facts about me Born: Dec 15 Where: New Waterford, Nova Scotia, Canada About me: I can’t live without hats, boots and coats.
At the age of nine, a.c.Mason made up a zombie story at summer camp. It scared the other kids so much that the camp counselor called her parents asking them to ensure she never did such a dreadful thing again. From this, she learned the power of storytelling, and the seed of the author was planted.
A youth filled with dichotomies and moving from place to place produced a young French brown woman with a curiosity to explore through writing the seedy side of our nature and desires. Add to that her fascination with theology, horror, and erotica and her love for politics and history and her unique voice surfaced.
She wrote off and on since her early teens as a hobby and for friends. Her work has always converged with other worldly ideas and creatures; ghosts, vampires, witches, warlocks and mystics of all kinds. She enjoys delving into the realms of the unknown and blurring the caution lines.
a.c.Mason is fluent in French and English. She’s an avid traveler, including most of Canada, both of the United States seaboards, England and Europe. Her studies were in the computer field. She advocates the preservation of our natural and cultural riches for future generations.
Take a journey with her characters and come face to face with what lays beneath their illusions. Emerge…on the other side changed.

AEQUITAS 1: Betrayal is Mason's debut, it came out with Lyrical Press in June. Mason calls it a paranormal thriller.

The Aequitas, part angel and demon, have kept the balance between the forces of good and evil -- until now. When Etienne Grant is kidnapped and transformed into an Aequitas, marriage to Auria is the only thing that will save his soul. Auria is a beautiful but efficient Aequitas, a General who wants nothing to do with love. A former lover has plans to prevent any hope of happiness with her new husband, and after murdering his own best friend and forcing Auria to join his rebellion, the balance between good and evil spirals out of control. Can Etienne's tenderness melt Auria's cold heart and heal the pain of their secret pasts? Their very survival depends on it.

I must admit to a bit of trepidation as a write this. I am conscious that I have promised Mason a look! Being aware though, that everyone has a right to their opinions and authors know this, and that I need to write what is right for me, I plow on...

I thought that Mason's world building was great (if you've read here before, I'm a fan of a good world), the premise and concept behind the Aequitas - the angel/demons - was interesting and challenging. I enjoyed the opening, not dissimilar to your every day urban Nocturne setting. Then the hero takes the heroine's hand and it's bye-bye to things you know.

I originally asked Mason if I could have the book in .pdf file, in order to read it on my laptop, but found I just wasn't picking it up. So, I transferred it to a pdf reader on the phone, which handles big files, but is clunky to use. I definitely think that this has also coloured my reading experience. I actually got a little lost. It got too complex for my wee brain. I find this if I read some of the Sherrilyn Kenyon's or a Mercedes Lackey tome, so maybe it's really a good thing for Mason's book. Heh.

I enjoyed the first half of the book, but the change (not saying no more than that!) in Etienne threw me. I couldn't pick up the thread again. It is a good book, and worth a read if you come across it, particularly if you like them cross-threaded and multi-faceted.

Having given that slightly-warmer-than-luke-warm-review, here's one that I came across. As I say, different person, different values, different opinion. It might work stunningly for you:

It's also worth a look at Mason's webbie, and her recent comments on RWA.