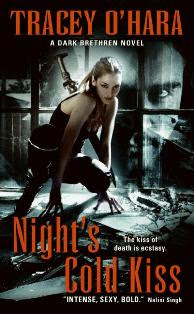 THE BLURB:
For centuries war raged between the humans and Aeternus vampires—until courageous efforts on both sides forged a fragile peace.
But the rogue Necrodreniacs will never be controlled—addicted as they are to the death-high . . . and bloody chaos.
Since witnessing the murder of her mother, Antoinette Petrescu has burned with fiery hatred for the vampire race—even for Christian Laroque, the noble, dangerously handsome Aeternus who rescued her. Now an elite Venator, Antoinette must reluctantly accept Christian's help to achieve her vengeance—even as he plots to use the beautiful, unsuspecting warrior as bait to draw out the bloodthirsty dreniacs.
Night’s Cold Kiss is Tracey O’Hara’s debut effort, marketed as “A Dark Brethren Novel”.  It’s set in modern-day America, but has numerous cool futuristic bits.
Antoinette Petrescu is a tough chick with a chip the size of a redgum on her shoulder - and rightly so - a parahuman killed her mother before he six-year-old eyes.  As a result,  her hatred for any vampiric race consumes her.  Now a Venator - a Necrodreniac hunter and exterminator - she’s dogged by a parahuman who keeps slaughtering woman who look just like her.  It becomes increasingly obvious that this parahuman is also the person that killed her mother - and he was supposed to have died in a fire.  Now he’s back, killing blonde girls, as a plain old, albeit very well-trained, human, Antoinette’s not safe.
Enter Christian Laroque, an Aeternus Vampire from the CHaPR (Council for Human and Parahuman Relations), who agrees to work with Antoinette, and investigate the deaths while keeping her safe.  Antoinette does not need to know of his own motivations for keeping her close.  Added to the conflict is the fact that Christian rescued Antoinette and her brother the night of her mother’s death and her father’s disappearance.
It burns Antoinette to have anything to do with the Vampire, but he is hard to argue with, and they’re fighting an attraction that consumes them both.
I thought that was an excellent read - I enjoyed the slightly-different-than-usual vampire lore, and the characters, depth and world-building were great.
Oh, and in case I’ve baffled you with any strange words, there is a handy glossary at the back of the book.
Memorable scene:
In the stateroom on the private jet.  The words “blood thrall” have any meaning for you?  Very hot.
Least memorable part:
There were a few places early in the book where I was jolted out of the story wanting to pop a few commas and such in.  The last half of the book, I never even thought about it.  Possibly, if you’re not a writer, you might not even notice.
A big thumbs up for Tracey O’Hara and her debut novel.  As Nalini Singh states on the cover, “Intense, sexy, bold.”
Can’t argue with that.
Take care, E.
Posted by Em ~ elove