U is for Ubiquitous Ugg Boots

Do I look like a crazy person?  No, stop.  Don't answer that.

I've signed up to do the Romance Writers of Australia's 50k in 30 Days.

Uh huh.  This is where you live like a hermit for the month of June, sitting at the computer in a pile of balled-up paper, used coffee cups and random handfuls of you own hair that you've pulled out, and write a big pile o' words.

Bearing in mind that don't live by myself in a self-cleaning cave, waited on by bare-chested male servants, eating chocolate and actually losing weight, I thought perhaps the full fifty might be asking a bit much of my life.

I've pledged to do 20k.  See, not totally sense-impaired.  For the most part.

If I manage it, it will go awfully close to completing a short story I've got about 8k on at the moment.  It means I need to write 600 words a day.  Keep me honest by checking the ticker over there somewhere --->.  Feel free to publicly heckle me if it's not up to date.

This story is about a Delly, a party girl who just knows that New Year's in Adelaide is going to be a huge bust; Alex, a sculptor with a past who shuns the fast lane, but whose appreciation of five-inch heels is growing by the hour, and Esme, a taxi-driving Cupid, who is handy with an arrow, but seems incapable of making good life decisions.

Mmm, can you tell I'm still getting a handle on this one?

So, first day, I was running around a lot and kinda forgot it was June.  Wrote nada.

Day three, I was feeling revolting and was being waited on by Sparky and the Offspring as I lay on the couch.  I read a book on craft, but wrote zip.  (Leigh Michaels, ON WRITING ROMANCE.  It makes sense to me, which is marvellous.  And unusual.)

Today is day four, and I fully intend to catch up again.  Promise.

I have come home and lit the fire because it's currently 9 degrees here, and that's not warm enough as far as I'm concerned.

In search of further warmth, I have donned the ugg boots. 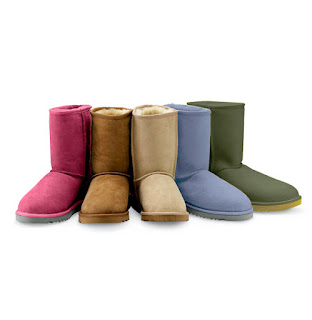 Now, ugg boots--being a sheepskin boot worn by true Aussies during winter, primarily for warmth--are not something I think about much.

They are warm, cuddly, soft and need throwing in the washing machine every now and then because, let's face it, feet are prone to the pong.  You can get the skin variety, which last longest, or duck into Target every year and buy a new, bright pink pair of synthetic ones.  All shapes, all sizes, kids, ladies, men, dogs.  They're everywhere for everyone. Ubiquitous came to mind.

: existing or being everywhere at the same time : constantly encountered : widespread,

Feeling ignorant, I have run to Google. Some interesting facts about ugg boots, from Wiki:

"Ugg boots (sometimes called uggs)[1] are known in Australia and New Zealand as a unisex style of sheepskin boot made of twin-faced sheepskin with fleece on the inside and with a tanned outer surface, often with a synthetic sole. The boots originated in those countries, initially as utilitarian footwear worn for warmth and comfort and later adopted by surfers there during the 1960s. In the 1970s, the boots were introduced to the surf culture of the United Kingdom and the United States by local surfers returning from surfing competitions in Australia. Ugg boots emerged as a fashion trend in the United States in the late 1990s and as a world-wide trend in the late 2000s, yet in Australia they are worn predominantly as slippers and associated with "daggy" fashion sense, and bogan culture."

"Generally worn for warmth and comfort, ugg boots had never been considered fashionable in their country of origin (Emmeline:  LOL!) , but in 2001 sheepskin boots emerged as a fashion trend in the US through Deckers' promotions of the UGG brand, with celebrities such as Kate Hudson, Sarah Jessica Parker, Cameron Diaz, Leonardo DiCaprio and Jennifer Lopez wearing the boots, and with Oprah Winfrey featuring UGG brand boots as one of her "Favorite Things" on her TV talk show.
...By way of contrast, ugg boots in Australia were worn predominantly as slippers and associated with "daggy fashion sense, bogan behaviour" and the "outer suburbs" when worn in public."

However, it is not all rainbows, roses and happy bogan culture for iconic national footwear:

"In 2007, Pamela Anderson, realising that ugg boots were made of skin, wrote on her website: "I thought they were shaved kindly? People like to tell me all the time that I started that trend – yikes! Well let's start a new one – do NOT buy Uggs!"

Yikes!  Regardless of your political inclinations, uggs are UBIQUITOUS.

And please remember to shave kindly!