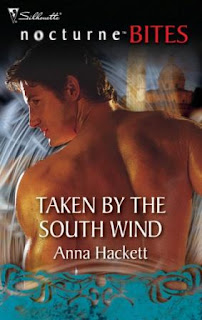 TAKEN BY THE SOUTH WIND by Anna Hackett

The deadly Tempest Winds have escaped. Now, four brothers gifted with the power of the winds must recapture the Venti Tempesta before they can unleash their evil on the world...

WindKeeper Dante Venti, Keeper of the South Wind, is in Rome on a mission to entrap the Southwest wind and its holder before it can infect humanity with the vice of pride. Dante already feels pride seducing him...but the real temptation is alluring assassin Samia Hassan.

Samia has been sent to kill Dante, but her body is irresistibly drawn to him, his power and presence enveloping her. And if she's not careful, she will be entrapped by Dante, body and soul...

TAKEN BY THE SOUTH WIND is now available at eharlequin.com and all major online booksellers.

Don't forget to check the Elenifest!

Email ThisBlogThis!Share to TwitterShare to FacebookShare to Pinterest
Labels: i love to pimp, Nocturne Bites