Life has been zipping past at warp speed lately--the most noticeable thing is that since we hit winter (seven days ago) it's sodding freezing here.  I am currently wrapped in a doona.

I downloaded some eBooks this week.  The May Nocturne Bites, Michele Hauf's HALO HUNTER and Mel Teshco's ICE-COLD LOVER, which is the second book in the Winged and Dangerous series.  I reviewed Mel's Bites HER DARK LORD a while back, and am really looking forward to this new release.  If I can stop looking at the cover.  How pretty is it? 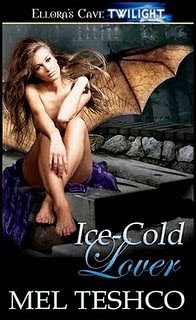 I'm currently fiddling with MkIV edits of DARK SIREN.  I swear, I get dafter with each pass, but I am pushing through.  It's times like this I feel like a just started this writing caper last week, not nine years ago.  So much to learn!
Anna and Rach have been absolute GEMS when it comes to critiquing for me, if I've gotten any better as a writer over the last year, the credit has to be mostly theirs.
I love having two CP's--lots of the time, they pick up on the same things, which are must-fixes.  But every now and then, and especially now that we're into small niggles with the WIP, they disagree, which I find fascinating.  It's a reminder that you don't have to please everybody (and really, it's an unrealistic expectation), but if you just happen to appeal to the editor you're targeting, you're in your way.
I've been looking over motivational writing stuff this last week during a particularly bad "I'm sooo STOOPID!" stretch, looking for something, and I re-visited Chiron O'Keefe's motivational/inspirational blog.  Anna had pointed Rach and me to this last time we had a dull spot *hehe*, and I think Chiron is quite wonderful.  I thought this bit was about me at the moment:
Here's the thing. Published writers don't have a special key to unlock the doorway to success. They simply knocked longer and harder until someone opened the gosh-darn door and let them in.

Another thing to consider… The journey is damn important. I know the thought of being published is the dangling carrot that keeps our mulish self plodding forward, one page at a time. But I believe writing is more than a means to an end. I believe writing is an act of self-discovery. Each page you write is a testament to your strength, your courage and your perseverance.

"Great works are performed not by strength, but by perseverance." –Samuel Johnson

While much credence is given to those who can do everything from Dance With The Stars to Surviving on Creepy, Crawly Bugs in this Reality-Show driven decade, few of those characters could ever accomplish what we do. We Write Books. This is our mountain. Every time we complete another novel, we are planting a flag. Visualize those flags fluttering in the breeze and feel a tingle of pride because We Are Writers. Damn, but we're lucky.

"It is not the mountain we conquer but ourselves." ~Sir Edmund Hillary
Thus, I pick up Captain Pink and I keep going.  I feel lucky because I KNOW I'm learning and getting better.  I can see that myself.  It keeps me going, because at some point, I am going to have learned enough to write something that an editor wants to publish.
I PROMISE MYSELF THAT.
And I promise Rach and Anna, because they've done the hard yards with me.  It's funny, but in ways, I keep going because I don't want to let them down after they've ploughed through at least three of my WIPs.  And ploughed is the word.  Or trudged.  Hacked with razor-sharp machetes?
So, how's the mountain-conquering going for you?
If you write, what do you do when you get stuck/morbid?  What works to keep you scaling that mountain?
Take care, Em x
Posted by Emmeline Lock