She'd been a thief a long time but bank robbery was a new low...

So, I have two Critique Partners--you knew that, right?

And you know that I think they're completely awesome, right?

Did you know that one of them has a COMPLETELY AWESOME NEW BOOK OUT? 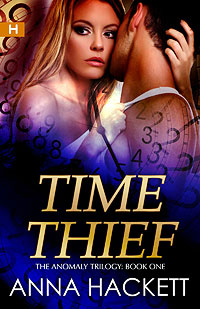 I have always loved Anna's work in an entirely non-biased way, ever since I read SAVAGE DRAGON, her pitch-winning Silhouette Nocturne Bites.

Hunted for her ability to steal time, Bay North lives a life on the run. All she wants is to make the crime lord who slaughtered her family pay. But now he's set the ultimate hunter on her trail and Bay will need all her skills to carry out her revenge and survive.
Ex-Navy SEAL Sean Archer saw his team killed by a time thief in Afghanistan and came back a broken man. He's made a dark deal with a criminal to hunt down all time thieves and now Sean's tracked the wily Bay North to Denver where he plans to rid the world of one more dangerous mutation.
But during a shootout, hunter and hunted find themselves depending on each other for survival. Joining forces to exact payback by stealing a priceless treasure, their reluctant alliance shatters both their defenses. Can Bay find the courage to trust? And can Sean convince a woman honed in revenge that she can have more than vengeance, blood and killing?
Get your copy at Amazon, Smashwords, or All Romance eBooks.  More estores to come.
Anna will be having a party at her blog soon to celebrate TIME THIEF's release, and I know she's going to be giving some very cool things away, so stay tuned for that.
Anna's been busy tweaking her website in time for her new release, I think it's come up a treat!  While you're perusing, check out her book list.
I'll leave you now to go download a book. :)
E x

Email ThisBlogThis!Share to TwitterShare to FacebookShare to Pinterest
Labels: Anna Hackett, Aussie, i love to pimp