Whoopeeee! There's some new Anna Hackett sci-fi romance up for grabs! IN THE DEVIL'S NEBULA...

Ya'll have heard how much I love my girl Anna Hackett, right?

I'm sure, based on my verbose and protracted fan girl love professions, you will have all raced out and snagged yourself a copy of the very fabulous first book in The Phoenix Adventures series - AT STAR'S END, and you're all waiting with anxiously bated breath for the next book. 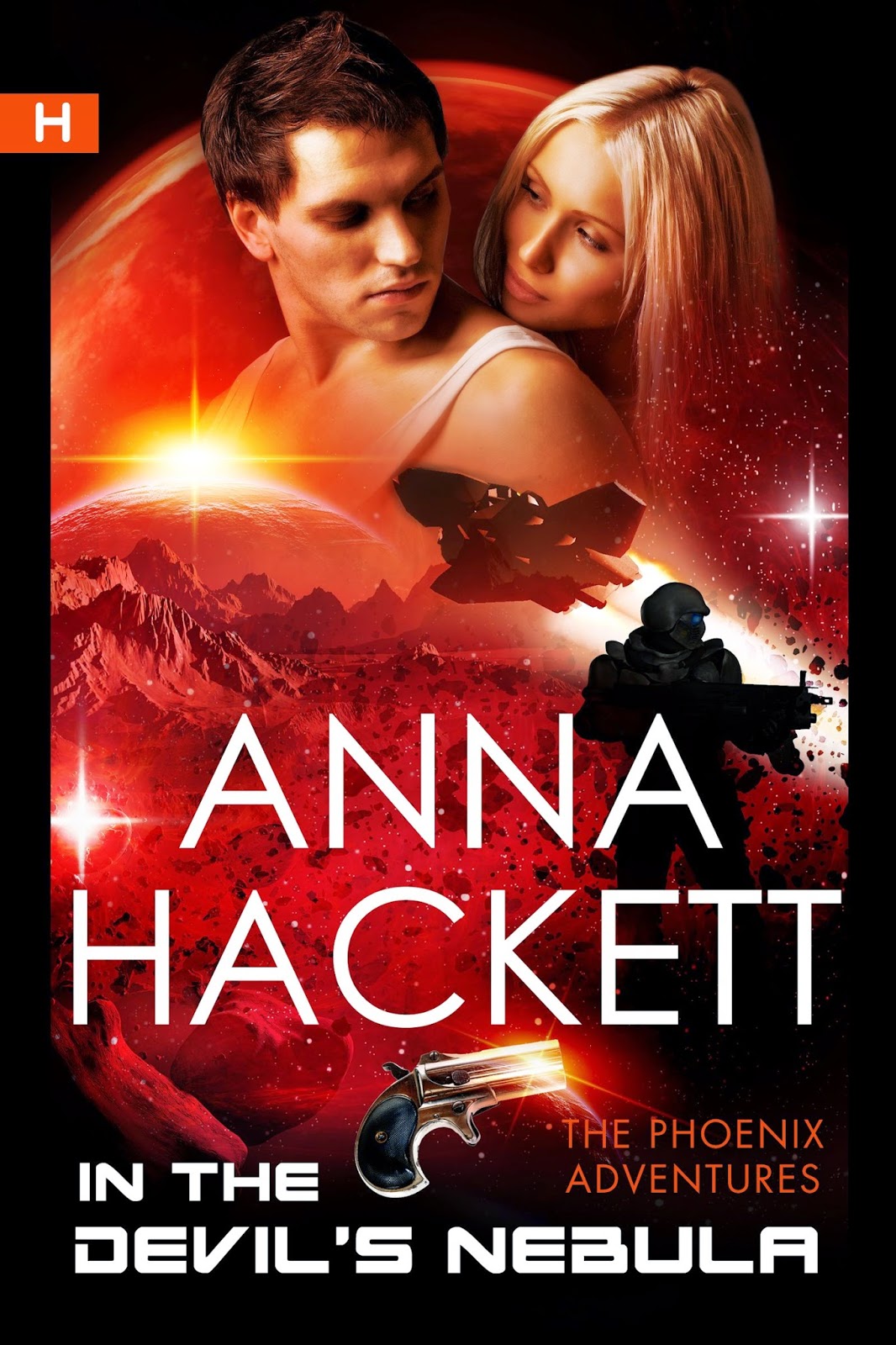 Action, Adventure and Romance IN THE DEVIL’S NEBULA
First there was AT STAR’S END and the treasure hunt to find the last remaining fragment of the Mona Lisa. Now travel to the heart of the Devil’s Nebula on the hunt for the gun used to assassinate Abraham Lincoln.

He lost it all.
His career, his woman, his sanity.
Two years ago, on a deadly mission to the lawless Devil’s Nebula, Commander Zayn Phoenix’s life imploded. Now the former Strike Wing pilot fills his days with dangerous adventures alongside his treasure hunter brothers.
But his nights are another story: haunted by nightmares of one unforgivable act.
Until an assassin lures him into a hunt. A hunt for her freedom from the Assassin’s Guild. A hunt for a derringer used in an ancient and infamous assassination—of old Earth president, Abraham Lincoln.
Zayn is compelled to join the perilous adventure with Ria Dante that will take them straight into the heart of the Devil’s Nebula, but not for money, fame or treasure.
He joins because Ria has the face of the woman he left for dead in the Nebula years before.

To read the first chapter or buy <<Click here>>

Ria moved her hands, her body bending like a slim tree in the wind. “Taiji isn’t so much about killing, it’s about settling the mind, balancing your energies.”
“Sounds very Old Earth.”
“It has its origins there, although they’re murky now. We don’t know exactly where it came from.”
“So, you’re feeling the need to balance your energies?”
She looked over her shoulder. “Yeah. Being hunted, stealing things, and dealing with you, it’s left me a little…out of balance.”
Zayn stepped toward her. “I came here to apologize. I didn’t kiss you because you remind me of Vik. I just…wanted to kiss senseless a hot woman who I’d just enjoyed a brilliant hunt with.”
Ria stopped and stared at him. “Jesus, Phoenix, you have no pretty words do you?”
He shrugged. “I’m just a simple pilot.”
She huffed out a breath. “There’s nothing simple about you. And for some crazy reason, it works for me.”

About Anna:
I'm Anna Hackett and I write action romance stories to thrill you, excite you and leave you inspired. I write about people overcoming unbeatable odds and achieving seemingly impossible goals to inspire you with the truth that the possibility exists for all of us to do the same. I love car chases, explosions and spaceships...and of course when the boy wins the girl. Oh, and I'm a sucker for that moment when the team is walking in slow motion, shoulder-to-shoulder heading off into battle. After reading, watching or writing an awesome action romance story, I'm left energized and feeling like anything is possible. I aim to give the same to my readers.
I love hearing from fellow action romance lovers! www.annahackettbooks.com