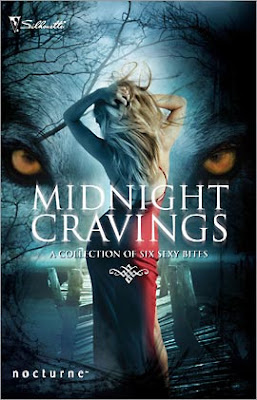 Even though I’ve read all of these novellas as ebooks – I’ve made it my mission to buy every Nocturne Bites released thus far – I was delighted to read them again as the first ever Silhouette Nocturne Bites six-pack anthology. The ebook wave is something I’ve embraced with enthusiasm. I mean, what’s not to like? But I still think there’s something homey about holding a print book.

This collection of authors, I understand, are all published and well-known in the Silhouette Nocturne (full-length) books.

RACING THE MOON – Michele Hauf
Sunday, a tomboy motor mechanic and feline familiar, chances upon Dean Maverick and his broken-down truck just before a storm. The sexual attraction is immediate and rampant, on her part and his.

Dean, a werewolf, is keen to get home before the midnight and the full moon. But he’s also chuffed that fate has landed him with such a hot piece – at exactly the right time. He needs sex to keep the wolf at bay.
Sunday quite likes sex. Usually, so do her partners. It’s the thing that happens after that makes them run. Being a familiar, she forms a bridge for demons to enter the mortal realm. Ah, when she climaxes. Sometimes, the demons are just confused and want to go home. More often, they are malevolent and go on a killing spree.

So, while she is sorely tempted to take what Dean is offering, she can’t control what happens after – not having had enough sex to practice her skills.

I’ll try to not to spoil too much.

I adored Dean – I love most of Hauf’s characters – he’s fun, sexy, caring and solid. Sunday was cool – hot and self-assured.

I first read Hauf’s work when I bought Seraphim (LUNA), years ago. Nothing I have read of Hauf’s since has done anything to dull my girl-crush.

MATE OF THE WOLF – Karen Whiddon.
I haven’t read many full Nocturnes – something I intend to remedy – thus, I don’t know much about Whiddon’s Pack books.

Allison Berg, a werewolf, approached the hottest man she has ever seen, hoping to ‘dog’, that he is her blind date. She slips on a beer glass and wakes later in hospital.

Kane Webster, Englishman and vampire, wants the woman who has fallen at his feet more than he has wanted anyone for centuries.

Their mutual attraction is going well, until she works out he’s a vamp.

When Kane is pursued by a long-time bounty-hunter, will she turn him in or save him?

I liked this book. Liked it, sure. It was a fun story, about a party girl and a dependable, sexy vamp. I think I need to read the rest of them.

CAPTURED – Lori Devoti
This one was deep and emotional. I enjoyed it much more on the second read-through.

Gray Barsk, hellhound (forandre & shifter), wakes to find himself in a cell with a very irate female hound.

Leve will not lose another child to the market. So when the new male arrives – his job to impregnate her – she will kill him first.

But she underestimates this hound.

The Svartalfar (dark elves) who captured him, fill the cell with synthetic pheromones, in order to throw the pair together and precipitate the act that will provide the dark elves with the hound baby to sell.

Impressed by and attracted to each other, they form a plan to escape and take the other prisoners with them.

This one started with a very dark topic – the theft of babies – and initially I found it tough to jump from that to the consensual sex that follows soon after.

A great premise that would have been better devoted to a longer novel, but it was still a good read. IMHO! I will look for more Devoti.

Speaking of deep, this one escaped me completely first time around.

I suspect I read too quickly.

Emma has convinced herself she has CFS. In truth, something is killing her from the inside.

A virtual invalid, her family hires her a nurse. Matthew. A very sexy, compassionate male nurse.

He seems to be healing her, but then also seems to be hurting her. She’s tired of people expecting things from her she can’t always give - will she find a way to save both herself and Matthew?

Will Emma give in, or will she fight? If she does fight, is she fighting him, or something else?

Anchored in Native American legend, this story had an ephemeral quality to it. I did enjoy it, but it lacks the pace of the other novellas. The sex is also toned down.

I did enjoy the twist in the conclusion, although it did make, for me, Matthew seem less manly.

It was well written, though.

Lycan Mahina Garner is a captain of the Necropolis Police Department. Ren Calder is the detective she has worked with a number of times, and shared one drunken, but scorching kiss with.

Ren, also lycan, has wanted Mahina for years, but she’s never given him any indication that she hungers for anything but catching the bad guys.

This story is one of a number set in Anna’s world of Necropolis.

I liked the characterisation, but felt that the move from rock-hard police captain to smokin’ hot love machine was a bit of a jump. And it was hot.

I enjoyed Ren, though he had the capacity to be a bit love-lorn. I wondered why he held back from telling Mahina how he felt. Because she hadn’t given him any signals? I would like to think that the men I read about have enough gumption to overcome that.

I would read more Vivi Anna, because I did enjoy the story, it was well-written and engrossing.

This final story, again is one of many, I think. Vanak has created The Draicon, a race of werewolves. Their enemies are the Morphs, former Draicon who have gone bad.

Vanak says she once wondered about what happens to those Draicon whose lifemates have been murdered by the Morphs. So she wrote the story of Katia and Baylor, both of whom have suffered the loss of their destined lifemates . They are Broken Souls.

Baylor would like them to commit to each other, but Katia is unwilling until she knows the fate of her father, who disappeared after a Morph attack on their family home.

If her father is alive, she should return to his pack, not commit to another.

So, she weaves a blood/candle spell in order to find her father. A spell she is forbidden to cast. When her father arrives for her, Baylor is convinced he has turned Morph. Katia thinks that Baylor is just saying that so that she won’t go home to her father’s pack.

I felt like I jumped in the middle of this one – there were a lot of people living in the house where Katia and Baylor were, and they were all paired, or pairing off. There was history, and I missed it!

Katia was, for me, slightly annoying. If I was presented with a red-hot male – whom I loved by the way - saying, mate me now, I love you, I need you, I would not be answering with “Where’s my daddy?”. Na-uh. Give me smokin’ male over family dinners around the table any old day!

When Baylor is injured fighting her father – not that Katia believes it was daddy – Katia knows she needs to make a decision about her life.
While these were all great, short reads, Hauf was definitely my favourite, but I am pleased to have discovered more good authors. I intend to read more of these ladies’ full-length work.

All in all, me likey. I will absolutely be buying the next collection that comes out in October this year, with Bites from Lisa Renee Jones, Olivia Gates, Linda O Johnston, Barbara J Hancock (yay, Barbara!), Caridad Pineiro and Lydia Parks.