You know how I'm a member of Darkside DownUnder?  That zany bunch of Australians and New Zealanders who write speculative fiction and are members of Romance Writers of Australia?  Well, they are the BOMB.

It's been true all along, but I thought I would reiterate that there are some very cool authors coming out of Oz, and a very special cavalcade from DSDU.

Never read Keri Arthur and don't mind a bit of hot paranomal romance?  Get thee to a bookstore!  How about Tracey O'hara?  Ditto!  Same goes for Erica Hayes, Denise Rossetti...  I could go on.  And on.

BUT, the reason for this Fabulous post is a brand-new book by a brand-new author.  I've got a brand-new copy on my iPad and I can't wait to get into it.

It's Kylie Griffin's VENGEANCE BORN, A Novel of the Light Blade, Book 1. 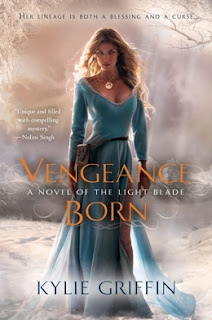 There is no mercy in the demon realm. No escape. In this place of desperation and conflict, anyone who is not pure bred is virtually powerless. Until an unlikely champion is born…
Annika, half-blood daughter of the Na’Reish King, longs for more than her tormented life among her father’s people. Conceived in hatred and bred as a tool of retribution, she’s gifted with a special talent that can heal as well as destroy.
With the Na’Reish vastly outnumbering them, Kalan, a Light Blade warrior, knows the future of humankind depends on him alone. Incursions into human territory and raids for blood-slaves by the Na’Reish Horde have increased. As Chosen-leader, he faces the task of stopping the demons—and convincing the Council of aging Light Blade warriors that change is necessary for survival.
When Annika learns Kalan is a prisoner in her father’s dungeon, her dream of escape seems within reach. She agrees to free him in exchange for his protection once they reach human territory. Now, marked for death for helping him, Annika must learn to trust Kalan as they face not only the perilous journey to the border but enemies within the Council—and discover a shocking truth that could throw the human race into civil war…

One would think that this gorgeous boon from the cover gods would be enough to make one run out and purchase this new release.

I had been slack, and had not done it.

Then, I was trawling through my google reader, and found That's What I'm Talking About review of VENGEANCE BORN.  I subscribe to Twimom's reviews to look for new books--she reads what I read, and I find some great reads there.

The Five-Star, A+ review tipped me over the edge and I raced out and uploaded Kylie's book.

I've never met Kylie, but she is a frequent participant in the Oz romance scene, she's a teacher and a volunteer for a number of rescue services in her rural area.  On top of this, she blogs many times a week, points the rest of us to cool places on the net and is a font of information.  She is a giver.  She also writes GREAT BOOKS, if Gikany and Una are to be believed.

And I believe them.

If you are unconvinced, and I don't believe for a second that you are, go to Kylie's blog for more reviews.  VENGEANCE BORN got five stars/top pick from Night Owl Reviews as well.  Very difficult to argue with that.

Once you read it and are DYING for more, you don't have long to wait for book two--it's out in July.  *SWOONANDDROOL* 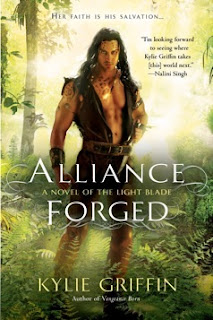 Go forth and discover the Light Blade!

It promises to be fabulous.
Posted by Emmeline Lock

Email ThisBlogThis!Share to TwitterShare to FacebookShare to Pinterest
Labels: Aussie, i love to pimp, Just Reading, The Alphabet Posts