G is for gleeful

Let me give you a bit of background before I launch.

I could always hold a note, had played a little piano and guitar, but wasn't especially impressive.  Then, I was cast in a musical at school, and spent many months rehearsing.  I LOVED it.  As I rehearsed, I improved every day.  Even my dancing became passable.  We performed, and it was great.  The following year, I was cast as the lead in ANNIE GET YOUR GUN.  I could still hit notes, but I was much LOUDER.  I had more control over my voice.

I was suddenly a vocalist.  Or, maybe less pretentiously, a Singer.

I still am.  I sing at home, I sing in the car, I sing with the offspring.  I've even been known to sing in churches for weddings and memorials, and other events.  I sing with choirs and solo.  I love show tunes, jazz, R&B and your general popular stuff.  I sing a lot.

One thing I don't do much of is watch television.  Too BUSY, dudes.

So I completely missed the onset of Glee.

Who wants to watch a show where the kids are in high school and dealing with angst and teenage ick?  Been there...  I glossed over it, without even meaning to.

Had no idea what it was.  Then, one of the kids asked me to put 'Don't Stop Believin'' on her ipod.  I listened, I bought a few albums.

As I listened, I wondered about the characters, who was singing what.  I'd seen the covers, but never put an actor with a voice.  I bought season one, and the rest is, as they say, old news.

Yes, there is teenage angst, but it's rarely belaboured and the shows move so quickly that you're never mired.  It's whimsical, and not intended to be real.  There are cute little romantic pairings that aren't saccharine, and are handled like we probably did in high school.  The relationship between the staff and students is interesting, and possibly a little TGTBT.  (I'll help:  Too Good...).  The storylines deal with issues ranging from coming out to weight problems, from problem solving to peer pressure, from drug use to blended families. They should be supremely awesome, but the rest of the school insists on giving the Glee club members a daily slushie facial.

I love Sue Sylvesters' character.  Awesome, cutting, witty one liners.  I wish I was her.

I ADORE the music.  I love their Mash-Up of It's My Life/My Confession, and they do a better (IMHO) rendition of PokerFace than Ms Gaga does.  They are all Very Talented Vocalists.  Some are Very Talented Dancers.

They are all gorgeous, or course. Which is why there are gazillions of fan vids on You Tube that must be trawled through to find the shiny gold bits.

In Cory Monteith, who plays Finn, I've also found my latest hero (in his younger years): 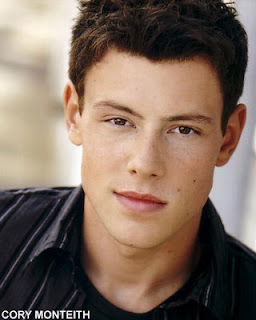 Are you seeing why this nearly thirty-year old has been cast as a teenager?

You should hear him sing.  It's not pretty and polished, but I swear my skin moves.

With the sad passing of Whitney Houston this week, check out this Glee Youtube vid featuring Mercedes Jones (Amber Riley) singing 'I Will Always Love You.'