Mel currently has STONE-COLD LOVER out for Ellora's Cave - here's a bit of a blurb:

Heiress Loretta Shaw is notorious for her loose morals and sexual needs. Trouble is, it’s taken her one too many one-night stands to realize that no man can extinguish the sexual fire she feels toward her guardian, Cray Diamond.

A long-ago curse made Cray immortal—a gargoyle, a guardian, who is impelled to protect a human chosen by the curse. He is imprisoned in stone during daylight hours but dusk returns him to flesh and bone to carry out his immortal duty.

That Cray can shift between human and living gargoyle at night bothers Loretta not one bit. She’s seen him naked many times and her desire for him—in any shape or form—knows no bounds. She’s tired of his resistance. He’s her gargoyle…and she wants him in her bed.

I've never had an opinion either way about gargoyles, but having seen that cover - I do now! I understand that Mel is currently working on ICE-COLD LOVER - a follow up.

Here's a great interview Christina Phillips did with Mel back in September...

I was just saying to Anna and Rach that I get a HUGE buzz out of people I cyber-know, or Aussies, getting published - it's nearly as good as getting accepted myself!

Maybe. I'll let you know when it happens. :)

PS - I CAN'T BELIEVE I nearly forgot this pic - Di and I catch up - with about 500 hundred Diana Gabaldon fans at my local library - Diana's only SA stop. SO COOL! Eleni Konstantine was there, as was Elizabeth Rolls. And many more, I'm sure.
PPS - I'm the one who's not a world-famous author. The one with the fangirl shakes. 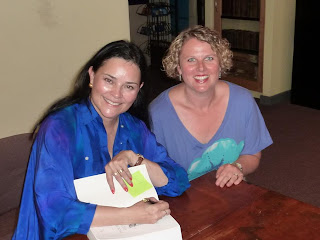