So, now you know Faith & Love.

It's time for Anarchy.

Anarchy is four.  Tomorrow.  There will be a pirate cake.  I'll take pictures.

Truly speaking, he is the anti-anarchy.  He is sweet and cute and totally led astray by his sisters.  He has a little speech thingy that means he can't put two consonants together, which is adorable at this stage, but might need looking at if it's still around when he turns twenty-one.

He is eating the icing first and matchbox cars, warm hugs and raspberries on your face with little white teeth in them.  He is bats and balls, Spiderman and Lightning McQueen.

Anarchy is also our showboat (here's where you  insert, "Like his mother." if that's what you were thinking. And rightly so.).  He likes to dance like a lunatic so Faith & Love giggle.  He loves making 'gas bomb' noises on his own forearm.  He tells great jokes.

(Of course, the proper answer to that joke, as I tell it, is, 'I moustache you a question, but I'll shave it for later.'  Snort.) 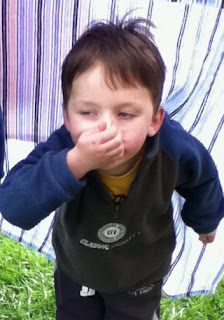 This is Anarchy under the clothesline, pretending that the blue sheet is the ocean,
and he's diving for treasure.  He is wearing his 'better pants', which are trackies,
but they are 'better pants' than jeans.

But he's not all sweetness.  Despite his propensity for girly items (Nail polish, handbags, hair product.  Sparky feels a little threatened at this point, but I tell him school will soon pound all those cute quirks out of our boy.), he knows the words to some very dubious songs. This is one of his favourites.  (Which might be my fault, but I'm not copping to anything.).


Yes, it's a song about a sex toy.  It's massively inappropriate and hilarious.  Sparky raises his eyebrows.


Sparky's more of a rock dude, but does a mean falsetto of his own.  He also dances beautifully to Katy Perry on the Wii.  Something I have felt the need to video in the past.  I am keeping it for leverage, should the need ever arise.


So, those are the offspring.  In all their sassy, perky glee.


Sparky and I would be completely lost without them.